In her blog Claire describes the themes and games of the different summer activity weeks as well as making a new Khmer friend….
My name is Claire and I am one of the five volunteer staff who came to JWOC from England to run the Summer School this year. I am halfway through studying an English Language and Literature degree at Oxford University and I am 19 years old.
I have had a wonderful time teaching at JWOC over the past month and I believe this was down to the flexibility of the work that we were given to undertake. The opportunity to be allowed to plan and arrange our own teaching schedule gave us real experience in planning, constructing and carrying out a lesson, as well as the flexibility to be able to adapt our lessons as we gained teaching experience over the three weeks. For instance, after the first few days we discovered that playing games with the children only consumed half the time we had initially planned for them whilst craft activities took twice as long!
In the planning period of our four weeks we decided to divide the three weeks of activities thematically week by week, as we thought this would help guide the vocabulary we were teaching as well as the type of games we wanted to plan. Our three themes ended up being Cambodian Life and Culture, Nature and Around the World. Cambodian Life and Culture Week consisted of discussing each other’s families and their different lifestyles, the different types of homes in a Cambodian village and what it means to be Khmer alongside what it means to be British. During this week we undertook tasks such as T-shirt painting, friendship bracelets, creating a friendship tree out of decorated cut-outs of the children’s hands and playing Khmer New Year games. Another particular highlight was when four of the students also took it upon themselves to show us traditional Khmer dancing. A favourite of these activities was the friendship bracelets; occupying them for an hour and a half, they asked every day when we could do it again, which due to the flexibility of our lesson plan we were able to do so. 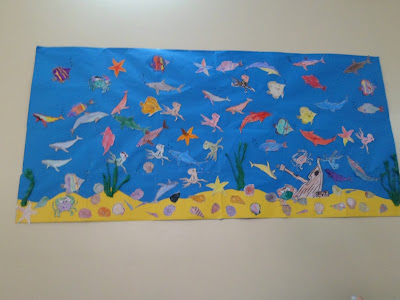 In turn, Nature Week was great fun, particularly when it came to the crafts. Some of the more successful activities we undertook were the making of animal masks and animal puppets; a giant under-the-sea display of sharks, octopuses and other sea creatures; a huge snake made out of decorated toilet rolls and a game of pin-the-tail on a very large home-made elephant, (which was put together by some of the volunteers.) Most of these then went on display in the library!
Animal themed games such as duck-duck-goose were a great way of re-grouping the children during the tricky period between the first and second session where we lost some of the children to JWOC lessons or school. My favourite part of the week was a game we devised where we took the Chicken Licken story and changed the characters names to animals (for example, Chicken Licken became Ellie Elephant) and then set the children in a circle and assigned them different characters from the story. The rule was that if you heard your character name you had to jump up and run around the circle back to your place. As the narrative became more repetitive and more characters became involved meant that this was not as easy as it seemed. Furthermore, their favourite English song that we taught them was “in the Jungle”, in the style of The Lion King! To finish the week, we watched the entire film. Tears came when Mufasa died as did huge laughs when Timone and Pumba fought off the hyenas.
Finally, Around the World Week was all about learning where Cambodia is in relation to the rest of the world and learning about other cultures. During this week we made flag hands and our own world map, on which we stuck the hands to make the biggest display of the summer school. Although I had to fly home two days early before the end of the summer school, the rest of the week was spent building up to and preparing for the great JWOC Olympics, a sporting event mighty enough to challenge the London Olympics that were going on in England! 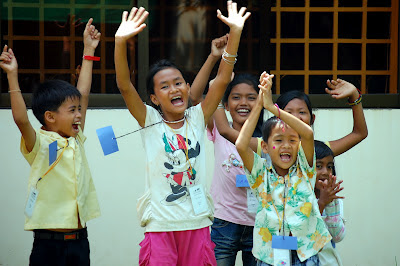 Finally, another aspect of the experience I loved was the opportunity of having a Khmer partner, Sampos, who aside becoming a great friend also helped me to breach the cultural and language barrier and taught me far more about Cambodian culture than I could ever have learned as an outsider. I will miss her very much, although hopefully we will continue to email frequently! Overall, I had a brilliant month at JWOC and I think the quality of the work the JWOC team has been doing is best advertised by the children, who were definitely the best part of the whole experience for me! 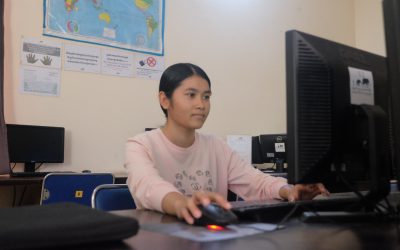 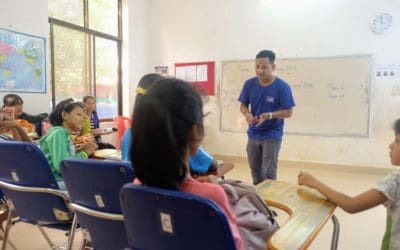 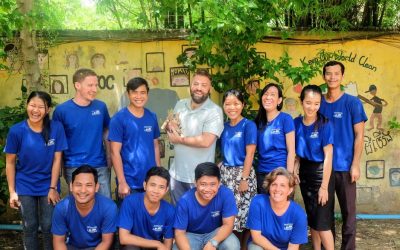