SIEM REAP, – P. Sopany, an entrepreneurial woman in a squatter’s village near here, peers into the opening of a shallow, dug well.

“Water from here is not beautiful,” she says.

The well is flush with the ground, framed by weathered boards. An irregular sheet of corrugated metal serves as a cover. Looking into the well, the water is grayish brown with bubbles on the surface. There are mosquito larvae and tadpoles.

Sopany and her neighbors estimate that drinking water from this well sickens adults ten to fifteen times a year, the children more often. But it is convenient, accessible and free; it’s what they have.

We are in her village today to offer what we hope is a better alternative.

I’ve volunteered to help bring clean water to this small village in northwest Cambodia, one of the 20 poorest countries on Earth. My role was funding the well – they cost $100 each. A local crew, I was told, would handle the labor. But I might be allowed to help. 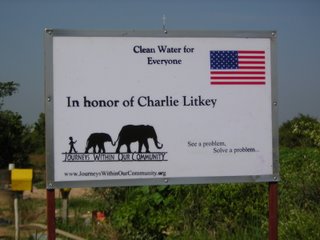 This is called “volunteer tourism,” a growing segment of the tourism market, fueled primarily by well off Baby Boomers like me. We want to visit poor countries like Cambodia, but are uneasy about vacations in Third World countries that feature luxuries and amenities far beyond the reach of local citizens.

So we volunteer. Some teach, like Debra McDonough, a business software project manager from Ottawa, who was staying at the same B&B. Debra has been teaching English at two local schools, mornings and afternoons, for three weeks.

(Critical thinking alert: Yes, I know, the cost of this halfway-around-the-world trip could fund 50 wells. But in that event, I couldn’t go. And, yes, I only worked on this project for a few days, what one might call “volunteer tourism lite.”)

I chose clean water for a handful of reasons: First, one in three Asians lacks access to clean drinking water. Second, the lack of access to clean drinking water is linked to 80 percent of Asia’s health problems. Third, simple and inexpensive technology is available to fix the problem. And, fourth, no other intervention contributes as much to national development and public health.

I chose this part of Cambodia because of the opportunity to work with Journeys Within Our Community, an American-led, Siem Reap-based, nonprofit whose approach to village-level work appealed to me: “See a problem, Solve a problem,” they say.

A Californian named John Walsh leads Journeys. A former UC Davis lacrosse player, John ditched a restaurant management career in San Francisco in order to do this work. Journeys drill 10 wells a month, among other projects.

Over the next few days, I’d be working with John, other Journeys staffers and their local well crews to locate and drill a well that would bring clean water to Sopany’s village.

That village is Teak Sen Tborng, a squatter village of perhaps a dozen families. Families of six to eight adults and children live in open-air huts constructed of bamboo, corrugated metal, palm leaves and thatch. The huts, spaced a dozen or so feet apart, sit along a public, hardpan lane.

I met Sopany the first day. We were walking the village, talking with the women (most of the men are day laborers and were away) about where to locate the well. 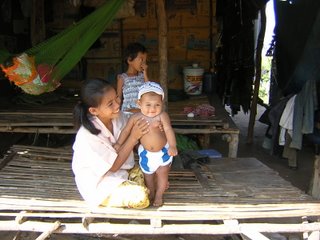 Sopany is well known to the Journeys staff. She is a customer of its micro-lending program. She borrowed $100 a few months ago to equip and supply a dry goods shop for the village.

Elegant – if still relatively poor – Sopany on this morning wore a knit top, a traditional, full-length skirt, and gold earrings. The shop is in front. She keeps hogs and chickens in the back.

Sopany wanted the well drilled across the lane in front of her shop. That made sense to the Journeys staff, so long as she understood it was the village’s well, not hers alone. She understood.

“Just build me one,” she said.

Its central location would make it convenient and accessible to other families.

We told Sopany the crew would arrive the next day. 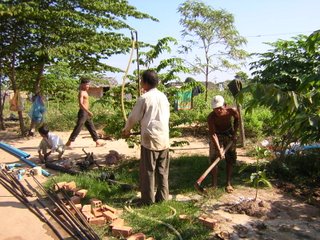 The three-man crew arrived on an old Honda motorbike pulling a narrow, two-wheel trailer. They unload their tools, the self-priming hand pump, and about 100 feet of pipe. The well must run to that depth to assure it’s reaching clean water, according to World Health Organization standards.

(A word about the technology. Nothing space-age here. Cast iron and brass, requiring no maintenance, the pump delivers a rope-like stream of water from the first crank. In nearby Vietnam, a nongovernmental organization is experimenting with a NASA-designed pump that disinfects water by passing it through a bed of iodinated resin known as MCV, or microbial check valve resin. Progress is slow. Sometimes, innovation means looking backward, in this case to the 19th century.)

They drill by hand. The drill bit is at the end of a 7/8ths-inch diameter pipe. Water pumped from a nearby open-pit well courses through the pipe to loosen the soil and bubble it to the surface. The driller punches the bit into the soil, then twists it 45 degrees. He punches the bit an inch or so deeper and twists again. Punch and twist, punch and twist – by my count, about 36 times a minute.

The first hour goes well. But at 30 feet down, with 70 feet to go, the drilling stalls. The driller, a slender, experienced Cambodian man, speculates he has hit a rock. Can he break it or wedge past it, we ask. The driller punches and twists for 50 more minutes, but no progress. This hole, as they used to say in the Oklahoma oil fields, is a duster.

The driller decides to start a new hole 10 feet away. It, too, stalls at 30 feet. The rock, he now figures, is a layer of rock.

That’s it for today: two holes, both stalled at 30 feet. Several hours of punching and twisting in 90-degree, full-sun December heat. The driller is frustrated and tired. Sopany’s hope fades for a well in front of her shop.We try not to show our disappointment.

We agree to find a new site in the village. The crew will return tomorrow.

At the end of the lane is another customer of Journey’s micro-lending program. She is Meas Mardy, who borrowed $100 to expand her bread business. Early each morning, she buys loaves of bread for 350 Riel (about nine U.S. cents) from a local bakery. She sells the loaves for 450 to 500 Riel in the nearby fishing market.

Business is good. Meas Mardy wants to pay off her loan early, get another larger loan, and expand.

She had spoken with John earlier the first day about drilling a well at her end of the lane. It looked like a good site for a second well to the Journeys staff. John told Meas Mardy they’d be back in touch. With the Sopany site now a duster, Meas Mardy was about to get that well.

A new crew started to drill the next morning. No rock, no problem. The well was in before noon. All that was left was to prepare, pour and finish the concrete base. And it looked like I was about the get my hands dirty. 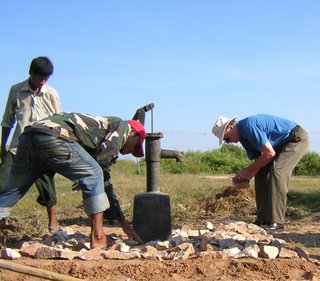 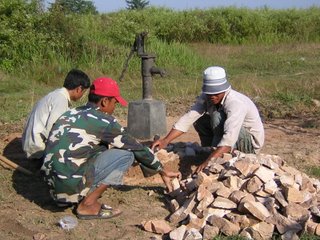 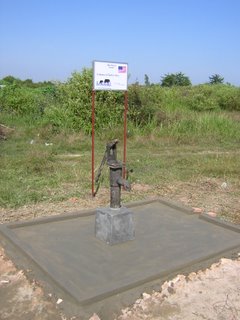 All that afternoon, we were watched over by another woman in the lane, Tet Marpp, and her toddler daughter, Nary. Tet Marpp placed chairs in the shade for us to sit on. Unaccustomed to tall, Western men, Nary eyed us suspiciously.

As Rin and the crew finished up, Tet Marpp was putting Nary down for an afternoon nap in a wooden and string hammock. She hummed what Rin described as a traditional Cambodian lullaby.

With the concrete base finished and clean water now a hand crank away, we took pains to leave quietly, lest we wake Nary.

Greenman is a professor of journalism at the and a former president and publisher of the Ledger-Enquirer. Graduate student Melanie Jarrett contributed reporting for this story. 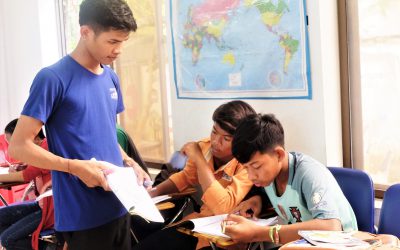 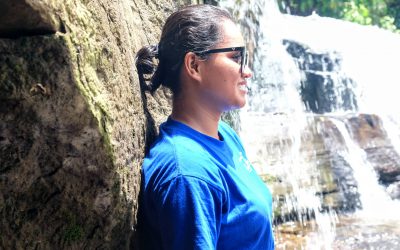 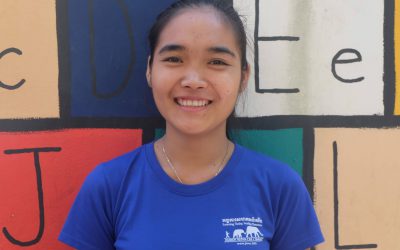